There is another way

"I am a very respectable young lady and I was not in any way trying to seduce the President with the outfit I wore. I had two outfits for the event, one was for my performance and the other was worn after I performed. The dress I was pictured in with the President was what I wore during my performance. I came on stage and greeted everyone according to their culture and I did the same for Mr. President. He was impressed and he asked where and how I knew how to greet in his native dialect and I said I learnt it. That was what brought about the giggling and smiles in the picture. I’m a performer and what I do on stage doesn’t reflect my everyday life. I had two outfits on that day and it was a youth event. Who wouldn’t feel overwhelmed meeting the President? Well, I did and I felt honoured because it is not every day you get to meet the president of your country,” Seyi Shay.

I felt sorry for Seyi when a classmate showed me these photos in class the other day. It's not her fault naa. #DesperateTimesRequireDesperateMeasures #MrPresidentMustNoticeMe #IHaveNoShame.

I couldn't overlook her guts to reply "us" saying she wasn't trying to seduce the President. Okay dear, who was your target? Do you think we have "tribal marks" on our brains? *no offense intended* Can you go for a job interview or an important meeting dressed like this? If you don't have sense, what happened to your stylists', friends', record label mates'. Don't tell me you picked the ratchet dress to an important gathering yourself. Fire your stylist today!! And get some sense girl. 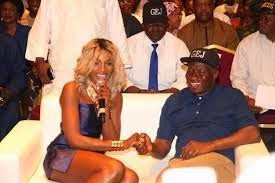 Remember Omoni Oboli, an actress, wife and mother (to 3 boys?) pulled the same stunt sometime ago. She, on the other hand, was remorseful in her response. Aren't the President's aides supposed to screen who meets the president? There should be an "appearance" of responsibility. Mama Peace don't sleep on a bicycle oh. 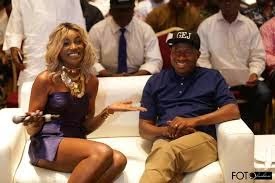 I deduced, from Dj Jimmy Jatt's interview last night, that entertainers take us for granted. In this words, "You don't see bankers and lawyers twitfighting unlike entertainers." 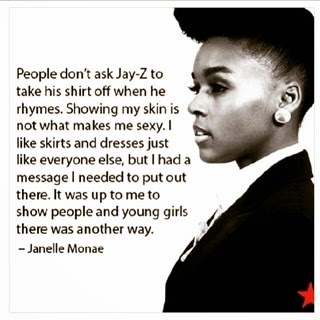 No one is saying you should perform in suits before heat will finish you but we're interested in the music not your "behind" and "before." Remember the lovely Tiwa Savage showing us beneath her black beautiful? You do not have to be pressured into conforming. Standing out pays. Look at Lady Gaga, Charly Boy and Denrele, Nneka, Omawumi and Asa.

Thanks for reading *keycees* :D Anuoluwapo.
Posted by Anuoluwapo at 14:05

She got the embarrasment she was craving

Lady Gaga does not wear clothes too na

Lawyers don't twitfight. we are gentlemen
I concur with janelle monae submission up there.
Sometimes,ladies we don't have to be stark naked to look sexy.

hELLO EVERYONE! *clears throat* LOL.
I was dumbfounded when I first saw the picture too. She shouldn't have.To think I've been a fan since the days of her first single, ''loving your way'' Oga sha, even as a performer, knowing myself I can't be caught wearing that outfit.