Why I'm not married

When I saw the photo below I screamed "YES!" People have no chill whatsoever. They poke their noses into places they have no business in and complain about having catarrh. 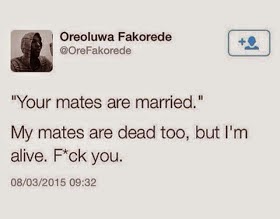 I understand when a parent asks the daughter about her boyfriend. But when your old primary school mate, who you ran into at the mall, decides to carry "your being single", for head like gala, isn't there something wrong somewhere?

You see, most of them haven't even sorted their lives. We all have issues, right? But they will forming well wishers. Aproko! If you really care, pray for her, don't ask upsetting questions.

Someone, who has been married for about 8 years, was gisting me about how an acquaintance drove all the way to ask her what was happening in her home. Why she wasn't poping babies. She said she laughed while she asked "Nne, we're the same age na, when would you have a boyfriend?" EPIC! Okay but maybe she didn't have to hurt her like that but what did the acquaintance want to hear. These so called well-wishers would just spoil your mood and leave you upset. Don't allow them. What's anyone business with when you get married? If you rush in and it doesn't work, "they" will laugh oh.
A guy, with a little 18month old daughter, told me he and his wife have been actively trying for another baby for a while. Guess why! Because people had been pressuring them before the daughter was 12months to have another baby. I rest my case.

Don't let your issues weigh you down. Aim to be better at whatever it is you're up to. You're competing with the man you were yesterday, not someone who is doing better or worse than you are. Look at the brighter side. Be grateful for what you have and hopeful for that which you want. If you haven't noticed, someone is praying for what you have. So stop being so upset about what you don't have that you forget to enjoy what you have. Thanks for reading bloghearts. Love, Anuoluwapo.
Posted by Anuoluwapo at 00:32

Happiness is the key thing. So many people are married and are living in hell. Peace of mind is everything. If you have God and believe in him you have everything

I remember a woman from my church many years ago that did not marry when she was young... she said many people kept asking her why she wasn't married... finally she said to them... I will get married when I am plenty good and ready... then she said, I am plenty good... I am just not ready... When she did marry her husband, she loved him and they are still married. Nothing should be rushed just because other people think it should ...

I can understand people not knowing where to draw a line;however,i dont understand why being asked would get one upset. We all need to be confident in ourselves and in our decisions. I am unmarried and constantly being asked but it never bothers me nor do i feel any pressure. I dont go around asking people such questions but i also do not compare myself to anyone and when i am tempted to,i quickly remind myself of the decisions i made concerning MY LIFE and even push myself to do more. Its for better or worse and when i do get married,its going to be for the rest of my long fulfilling life. Getting upset or feeling pressured just boxes one into a corner of wrong choices.

heheheheheh Ask and tell them oh! They be taking Panadol for another PeRRons head ache.. Awaon Alakoba.. Really ehn, its relatively strange hw some folks appear to mean well where as all they mean is for you to not fair well.. Ironic ba?! Issorait.. We are watching..

Hacstually yeah, I love the part when you added that we are not competing with any boRy, we are only trying to better our best and norrin more.. if someone wants me to be rich and buy a car over night, then let them pay money into my Stanbic account, if someone wants you to have a baby so badly, let them get pregnant for you, if someone wants you to have a spouse so badly, then let them marry for you.. Issorait.. Human beings will always be human beings, and me sef i no holy pass.. How are you Bubba, this was a ghen ghen read.. Turn down for what mbok?! Wity Anu toh sure yeah, we only Turn up in style.. ossshhheeey Turn uP!

Double EPIC for that response. The acquaintance dey learn work nah.
My friends even complain that I don't ask about certain stuff, and my reason is none other than the fact that, I hate poking my nose in other people's businesses and it sometimes feels like work for me. Most times, I forget details of the gist I hear sef. I guess it's just the way I am.
Sometimes, I feel 24hours is not enough for me, where the time dey to dey wakabout and be asking stupid questions.

Hahaha...mami, you know, I have been asked manyyyyyyyyyy times, 'Niesh, when are you gonna have babies' by my friends...and I tell them this, 'When you stop asking me that!'....I mean, my husband isn't concerned, neither is anyone close to my family, so why in the name of God would someone who thinks that freedom of opinion means dipping their noses into my business ask me such question and expect me to answer nicely??

To any lady out there who feels pressured cuz people keep asking her when she's gonna be married, she needs to tell them to provide her with a husband or better still, help her kidnap a husband...TF!

How are you mami....I hope you got my email...I responded to your last email....lemme know eh so that I could resend it if you didn't get it.

Thanks ever so much for this post my dear - I wonder when people will start minding their business. Sometime in 2013, I was on the phone to an old class mate of mine who was married and a mother, and when i said I was not married hen she asked me, she was wondering what was wrong with me

I would be honored if you shared anything from my blog on yours, you are so sweet ♡

In this part of the world knowing how concerned we are about marriage, their question is understandable. What I don't fancy is the tact they lack when asking such. Person wey dey ask is already defensive and harsh, what do you expect the response to be? I remember sometime last year, one of my friends had her 1st baby then next thing I see on my phone was our mutual friend asking me when I will get married. No prior conversation o. She just went, "Lola when are you getting married now that school is over. Sososo just gave birth to a beautiful baby girl o".

At that instance I wanted to give her an EPIC retort but I had to hold back because I had done something like that before and I know she's just genuinely concerned. My take, if you will ask at all, be sensitive enough to know the person's mood.